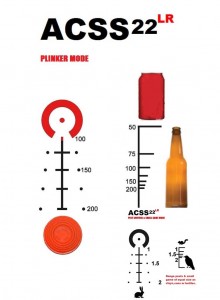 It’s not often a new scope comes along that makes you think “Why didn’t I think of that?”. Well that is exactly how I feel about the Primary Arms 6X 22 Scope with ACSS 22LR Reticle PA6X32-22LR. Typically scopes either have a traditional crosshair setup, a dot, a post or a reticle based on the intended target. This scope falls into the latter category but what sets it apart from others and makes this scope interesting and fun is that the reticle is based on typical .22 plinking targets. These targets include clay pigeons, soda cans, bottles and the smallest game.

Visit the product page for reviews and purchasing information.

ACSS® (Advanced Combined Sighting System) is a giant leap forward in reticle design that utilizes bullet drop compensation correlated with range estimation and wind holds in one simple system. The ACSS ® reticle increases first hit ratio and decreases time on target. This scope is specifically designed for 22LR rifles, range clays, cans, bottles, and more! It is the perfect optic for plinking or hunting.