Wilson Combat 1911 22 Conversion Kit – From 1931 to 1947 Colt manufactured the “Colt Service Model Ace” or the “Colt Ace” for short. The Colt Ace was a .22 long rifle chambered version of the Colt Model 1911 .45acp. The Colt Ace was designed to be low recoil training firearm that matched the controls and feel of the Colt Model 1911. Several years ago 1911 master pistolsmith Bob Marvel resurrected and improved the slide and component portion of the Colt Ace thus filling the void for the 1911 22 Conversion Kit. While no longer affiliated with Marvel Precision the the company that bears his last name the conversion kit lives on. In our case here the Wilson Combat 1911 22 Conversion Kit is in fact a re-branded “Marvel Precision Unit 2”

Installation is simple, just remove the slide stop, slide the upper unit off your .45, then install the Wilson Combat 1911 22 Conversion Kit. Once you re-install your slide stop and substitute the ten round .22 magazine that come with the unit, you’re ready to shoot .22’s. It’s that fast and easy!

While shooting .22’s, you’ll appreciate the crisp sight picture of the fully adjustable rear and improved ramp front sights. When you change out the slide, the sights go with it so you’ll be right back on target with each caliber change We all like to save money, but your objective is to become a better shot. It’s quite common for shooting instructors to train with .22’s. Since the .22 has less recoil and muzzle blast, students tend to learn faster with less tendency to develop bad habits, like jerking the trigger in anticipation of the recoil. To get the most from your training, our conversion unit lets you practice with the same grip, trigger pull, safeties and action of your .45 auto. Once converted, your .22 has the same overall dimension as your .45 so you can use your existing holster. Oh, we’ve been so busy telling you how we’re going to improve your shooting and save you money that we forgot to tell you about the scalloped slide top, checkered slide stop and superb accuracy. 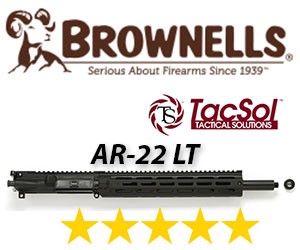